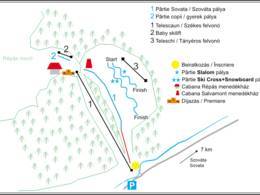 The largest ski resort in the Gastein Valley stretches from Bad Gastein across the Stubnerkogel, Angertal and Schlossalm to Bad Hofgastein. The slopes offer more than 1,000 meters elevation difference.

007 ELEMENTS is a cinematic installation featuring the world of James Bond. Over two floors, visitors can view the original shooting locations of Spectre in Sölden.